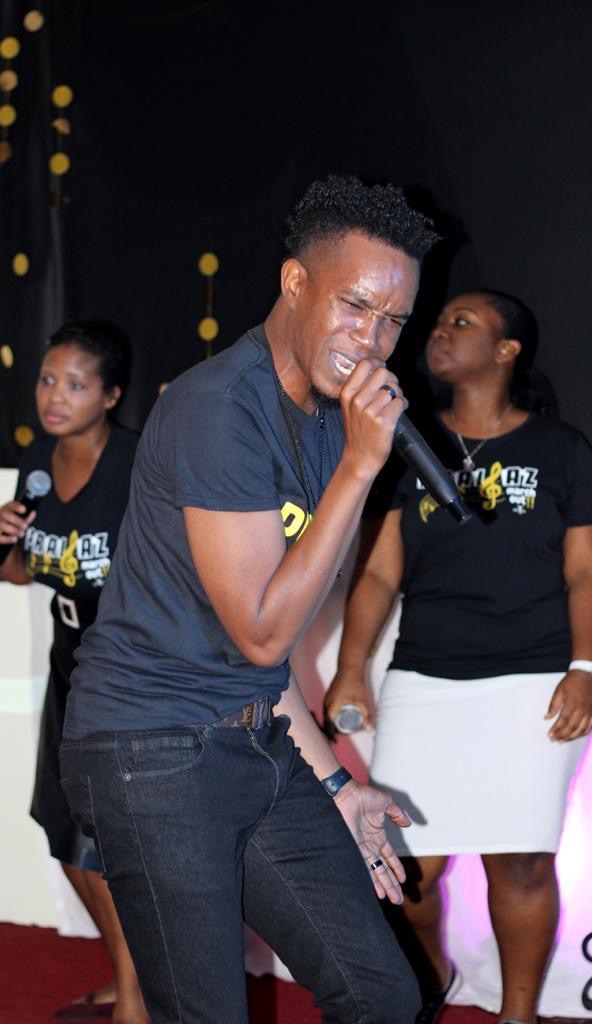 LeoNell Teape is an embodiment of energy, enthusiasm and eclecticism whose proposed objective is to shew forth the praises of Him who has called him into the marvelous light.

A son of Manchester, Jamaica, and growing in a Christian home, he was exposed to music through his four older brothers who sang and played musical instruments. LeoNell would often borrow their records to follow suit.

Surrendering his life to the Lord at an early age, music and ministry became an integral part of Teape’s journey.  He began an active involvement in the music department at his home church, Holiness Born Again Church (HBAC), Heartease, joined the church’s celebrated choir and progressed to becoming the Choir Director at the age of eighteen. In subsequent years, he has led, trained, served and improved many choirs and groups.

In his early twenties he founded the performing group, Vision, which ministered to the hearts of young people across the island. The group lasted six years during which time he moved to Westmoreland and continued to develop himself in the Lord, serving as praise and worship leader, choir director and musician. He was officially ordained a Minister in Theology in 2012 and continued to pursue ministerial efforts through his musical passions and talent.

LeoNell’s dedication was birthed out of his personal experiences as a young Christian. He vividly remembers having to listen to certain gospel music in secret, as the older generation were not yet acclimated to the evolution of the Christian culture. Although listening to reggae music was considered ‘ungodly’ at the time, he attests that it was this exposure to gospel reggae that excited his walk with Christ. With the understanding that young people are attracted to diversity in music, he mandated himself to the kingdom agenda of reaching these souls through his artistry.

LeoNell has shared the stage with renowned artists including DJ Nicholas, Papa San, Prodigal Son, Kevin Downswell, Rondel Positive, Jermain Edwards and other gospel greats locally and internationally on various religious platforms. His signature sound and unique style of music is a result of abstract fusion from multiple genres. With a fresh burst of energy in every performance, captivating dance moves and unimaginable jumps, LeoNell’s ministry undoubtedly remains etched in the mind. He draws inspiration from Tye Tribbett, Papa San and DJ Nicholas who have shaped the non-traditional composure and distribution of his music. Currently based in Tampa, FL, LeoNell released his first hit single ‘Fight 4 U‘ in August 2019 and subsequently debuted his album ‘PRAISAZ MARCH OUT‘ in February 2020, which remains uplifting and relevant especially throughout the present adverse circumstances.

His real-life experiences have taught him how to remain thankful in all situations. As in the words of Paul, he knows how to be abased and he knows how to abound. Having started his first business in his teenage years and being catapulted into entrepreneurship, he endured many failures but remained persistent on the path to success. He is highly self-motivated and couples this with a deep understanding of the Word to charter his daily living. In September 2019, he received his Chaplaincy and an Ambassadorial Appointment to the United Nations as Commander of the Most Distinguished Order of Kingdom Ambassadors.

Despite his many accomplishments, His Excellency Chaplain LeoNell A. Teape, CDKA, currently serving at The Transformation Center in Tampa, FL, has found a greater purpose through ministry and aspires to build the Kingdom by declaring the love and goodness of Christ and empowering others to experience the same. His latest project ‘All A We‘ was created in lieu of the chaos and frustrations that faced the world in 2020. The single features artistes from different regions of the world, signifying the message of unity and good necessary to overcome present evil.

A kind, selfless and caring individual who values family and friends, he is proudly married to his biggest fan, Semetra, and his heritage belongs to his daughter.